I get these ideas about things I want to do. This was one of my ideas… to trek Peru’s infamous Inca Trail. I recommend training for the occasion!! I was super unfit but the whole experience was incredible. 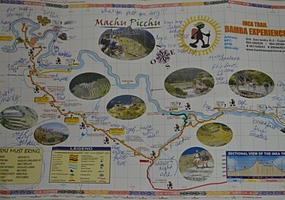 Travelling around South America, I met so many people who said that Lima was an amazing place to be. Unfortunately, we had an evening in an airport hotel before it was time to fly to Cusco.Cusco’s elevation is 3200m so many people are concerned about altitude sickness. You can certainly feel a difference when you land but we tried not to think about it in the hope we would be OK! I did the Inca Trail with Bamba Experience. This was booked for me by STA Travel as there were so many rules and regulations and permits to think about, I wanted to know that I was travelling with a reputable company. Of course, it would be cheaper to book direct with the company so I’ve included the link to hopefully save you a few pennies!My first night in Cusco, I attended a meeting with a guide from Bamba. This gave me the opportunity to sort out a sleeping bag, walking poles and ask any questions. We also went through the route in detail! I won’t lie, I was scared. Terrified! 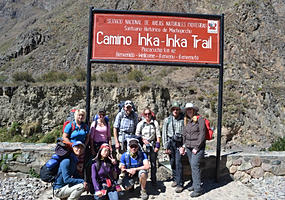 The journey from Cusco to the start of the Inca Trail is fairly long. The roads are windy and there’s a lot of up and down, up and down. Of course, this sent me straight to sleep so I didn’t see any of the lovely scenery!We made a quick stop for breakfast which wasn’t included so carry a bit of cash to pay. This is also a sort of shop-stop where you can get any last minute items- coca leaves, tissues, water etc. From here on, prices will double or triple once on the trail so it’s best to stock up. Of course, water is heavy so I decided to save my shoulders and spend the money whilst on the trail!We arrived at the base of the trail and had to repack our bags to accommodate for the sleeping mattress and sleeping bag. Well, this is where everything went wrong! With these added items my bag was just too heavy! There was no way I could carry it. Jess is a weakling! I had arranged for a porter to carry my bag tomorrow but what was I going to do today!! I was going to pick it up and get on with it, that’s what! Oh dear. 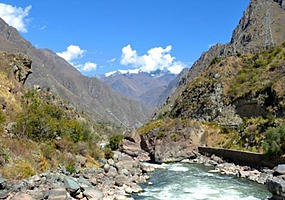 Immediately, we were surrounded by such beautiful views but my mind wasn’t thinking about that. I had realised that I had made a terrible mistake. I was here with professional hikers who have conquered trails and climbed peaks across the globe. I wasn’t one of these people. I hadn’t done any training. Oh gosh. This was going to be a disaster. You might be wondering where Wolvo is at this point, well she booked too late to do the trail with me so she was setting off with her own party tomorrow! I was in it alone.It seemed that I was coping as this stretch was fairly flat and the view really was breathtaking.Just when I was beginning to think that I could survive this ordeal, we began to climb. I was sitting down resting within ten minutes… this was going to be me the whole trip. My bag was so heavy, I had about six litres of water which didn’t help! Our guide, Juan, was great. He allowed me to walk as far behind the group as I needed to and let me stop when he saw that I really had gone as far as I could! 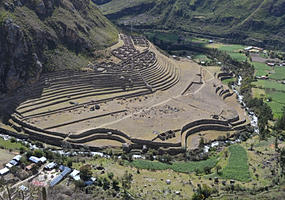 Juan would call us all together at intervals so that we could admire the view, look ahead at our destination and to hear stories about the Inca people. He had studied all about the ancient civilisation at university and had a wealth of knowledge. He spoke softly as we sat on the grass, sun shining down on us, I thought that I could just fall asleep and I would wake up from this terrible nightmare. No such luck, it was time to carry on.I arrived at our camping spot last. The porters were amazing, they had arrived hours before having pitched the tents and prepared dinner. I stupidly announced that I would shower in the morning as I was tired this evening. I received laughter in reply… shower? There aren’t any showers until we’re back in Cusco. Things were just destined to get worse! 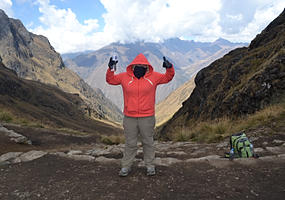 I had heard about Dead Woman’s Pass. I had heard a lot about it. It was long, tiring, difficult, high… It never occurred to me that I was actually going to be climbing it. This was quite possibly the worst day of my life. Seriously, I don’t know how I didn’t actually become a dead woman at Dead Woman’s Pass. Basically, the altitude had started to affect me. I had a terrible headache and felt sick. Super sick. That meant I had no appetite which meant I wasn’t eating so I had no energy. It was a viscious circle. The more I tried to make myself eat the more sick I felt. The less I ate, the less energy I had, the slower I walked. Juan and the rest of my crew (aka The Professionals) were giving me a steady supply of coca leaves… I’m sure they started to make me high! Eventually, I really felt that I couldn’t go on so Juan pulled out a magic liquid, all I had to do was inhale and bam. A new lease of life. When I reached the top I was in a very strange state. Had to cover my face (see pic above) and had a few minutes of madness. I soon returned to ‘normal’! 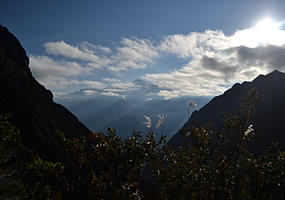 The descent from Dead Woman’s Pass would lead us to the campsite for that night. There was a big celebration that evening as we had effectively conquered the most difficult part of the trail. Needless to say, I slept wonderfully that night. Even upon the rock which my tent was pitched.The next day I was able to eat breakfast as we were camped at fairly low altitude (compared to what we had been at) and it was day three of washing in a bowl of water. Oh a shower was looking so appealing.We set off and today we would have the opportunity to take photographs. Up until today I had very few pictures as I was too busy concentrating on my mantra “Each step I take is another step closer, each step I take is another step closer”, I think I was even chanting this in my sleep. It was good to meet others on the trail, if I saw people struggling I would strike up conversation and we would sit and chat about our struggles. I love like-minded others! 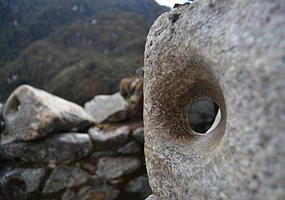 We stopped at an old temple where we were able to sit and hear more stories about the Inca people. Juan spoke with such detail that it was almost possible to imagine the people being there with us. This photograph is of an almost perfectly carved circle. It would have been used as a tie for a curtain to create a divide. There were so many amazing carvings to see. The Inca people were obviously very talented craftsmen.The more we walked, the more amazed I became. There were tunnels which had been cut through huge pieces of rock. It really was spectacular. Not to mention the views the Andes created in the distance. 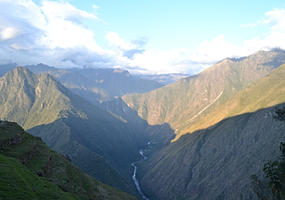 It was our last day of walking. We were camping as close as you could get to the Sun Gate as possible. This is where we would see the sunrise and get our first glimpse of this awesome city. If I wasn’t so tired I would have been uncontainably excited!

Our cooks and porters made a special dinner for us and even managed to bake a cake to congratulate us. We all gave tips and had a group photo, shaking hands with everyone and thanking them for their efforts. It is incredible to think that some of those men would be back at the start of the trail tomorrow doing it all again. I don’t think I would do it again in my lifetime! 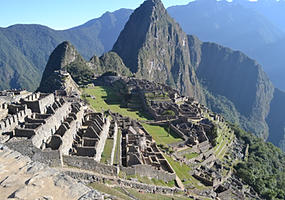 We must have woken up at 3am on that last morning. It was a very quick pack up so we could get on the trail straight away. We arrived at the entrance to the Sun Gate to find it didn’t open until 5am so we had arrived super early as it was only just 4. Now we wait! As soon as the gates are opened, it’s time to check the identification and proceed up the mountain before heading down to Machu Picchu.The view from the Sun Gate was pretty spectacular. As I had been last to arrive, everyone was sitting eating breakfast and Juan thought it would be a good idea for me to make a start in the hope I wouldn’t hold everyone up! All I can say is that the view got more spectacular with each step I took.There were people walking up the hill towards the Sun Gate and they weren’t carrying backpacks, they weren’t dirty or smelly. I asked Juan and he informed me that they had taken the train. You’re telling me there’s a train? A train?! I honestly 100% thought the only way here was to do the Inca Trail. Of course, I’m glad I did it. I feel that I pushed myself further than I’ve ever pushed myself before. I know that I’m determined and I’m glad to be able to say that although the slowest person in the group, I really did survive the Inca Trail!

Liked what you read? Check out the trip Jessica went on: Inca Trail Trek to Machu Picchu 4 Days

Melbourne: the Place to Be in Australia

Exploring the Land Down Under | Part 02

The Happy Nomad is a blog created by bamba to share travel stories, information and tips on every destination of this wonderful planet. Our aim is to inspire travellers worldwide to go on their next adventure and motivate others to make travel a lifestyle!